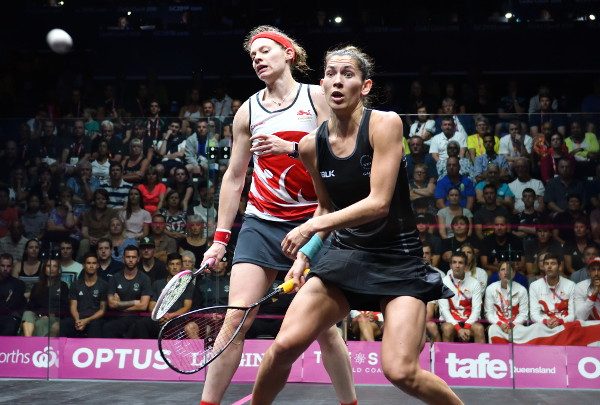 Four years ago, as Joelle King set about becoming the first New Zealander to win the Commonwealth Games women’s singles title, her home country’s broadcaster opted to show a boxing bout between athletes from Zambia and Kenya. At the time, TVNZ claimed it faced a challenge due to the sheer scale of Kiwi athletes who were competing at the Games. Or was it squash’s profile? Either way, it proved a poor scheduling decision, given that King went on to land two golds and a bronze medal on Australia’s Gold Coast.

“That was ridiculous,” smiles King, speaking from Bristol, her home in the UK for the last five years. Since the 2018 Games, New Zealand squash has been riding the crest of a wave, with Paul Coll reaching Men’s World No.1 in March and King currently back in the world top five. Moreover, since squash managed to resurrect its world tour during the pandemic, King, 33, feels the sport is back on a pedestal in her homeland in a key Commonwealth year. “To have both a male and female at the top of the game, it really helps the profile of the game,” she says.

Not that it’s been easy, with both Coll and King unable to return home for three years due to New Zealand’s strict quarantine rules. “We were so unaware of what was going on in the early days of the pandemic,” recalls King. “The question of whether we should stay in England and ride it out turned into not seeing my family for three years. With the quarantine, it was also hard to justify as a professional athlete sitting in a hotel room for two weeks.

“There was a period through the pandemic which was really tough with long hours spent on my own. I know all the players went through the same thing. I questioned ‘What am I doing?’ ‘Why am I so far away from home?’ I’m not the first player to say they are happy to see the back of the bubble situation.”

King used the free time by taking online ballet classes and maintained a positive mindset by focusing on what she wants to achieve in the remainder of her career. “There is still so much time to achieve things, to be grateful for what I do and leave my mark on the tour,” she adds. “I don’t have as long left in the game as a 20-year-old does, but there is still time left to do what I want to do. “My team asked me some questions which helped me not to think too far ahead and to make the most of every minute.

“I have this great career doing something I love. As I get older it’s about being a bit more grateful for what I do.”

“We all know who is doing what and everyone complements each other,” King says of her team. “When you are younger, it can become a bit confusing. Now, everyone knows their place. Even at 33, I feel like I am really improving. I feel like I have a bit of an army around me and everyone is invested.” Living in Bristol and training at Stiff’s Elite Squash camp at the city’s picturesque Workout Harbourside club has also been critical to her health and wellbeing. She first met Stiff following her nine-month lay-off with an Achilles’ injury in 2014 during which she suffered self-doubt and low confidence.

“From the moment we met, I felt at ease with Hadrian,” she says. “I was having a tough time but he is easy to open up to.

“We are so spoiled in Bristol. I love being outside, I love to socialise and that’s what is so great about the city. We have an amazing spot where you can nip out into beautiful green spaces. Training at high intensity, you have to be tuned in and focused, but as soon as you walk out of the club you feel instantly relaxed. There is a great balance. For me, it felt like the first place outside of New Zealand where I was really comfortable.”

“When she feels homesick, King often drives to nearby Clevedon Beach to sit by the water and venture in for a coldwater dip, which reminds her of home. There will be little opportunity for such luxuries in Birmingham, when the Kiwi will seek to earn medals at a fourth successive Games.

“At Delhi 2010, I was young, naive and so oblivious as to what a Games is like, but I surprised myself by winning medals. Glasgow had a great atmosphere and going back to the Gold Coast it was electric and one of my proudest moments. “I wanted to win three golds in 2018 but came up short with two golds and a bronze. When I take a step back though I can see it was an incredible achievement.”

She will team up once again with Amanda Landers-Murphy in the women’s doubles to defend their title and will pair with Coll in the mixed doubles. King was injured towards the end of April’s WSF World Doubles in Glasgow but it was still a useful scouting mission ahead of the Birmingham Games. “It was a good marker to see where the competition is currently at but it is bloody hard work playing two events!” she freely admits.

“Half of us who were playing two events stayed at the court the whole day, with 14 matches in four days.” King had her leg taped up in Glasgow while others had shoulders strapped. “Everyone seemed to be carrying injuries from the doubles as it’s so brutal,” says King. “It’s so different. The tin is so low and you are having to cover more of the court. Quite often players will just play one side so you are essentially using just one side of your body, which is weird.”

Despite the physical rigours of the forthcoming fortnight in the West Midlands, King is eager. “There are younger ones coming through along with the established players,” she says. “There are so many great singles players now and great pairings in the doubles. It will be a huge opportunity to showcase squash to the world.”