Singh, 14, steals show on day one of Birmingham 2022 Commonwealth Games 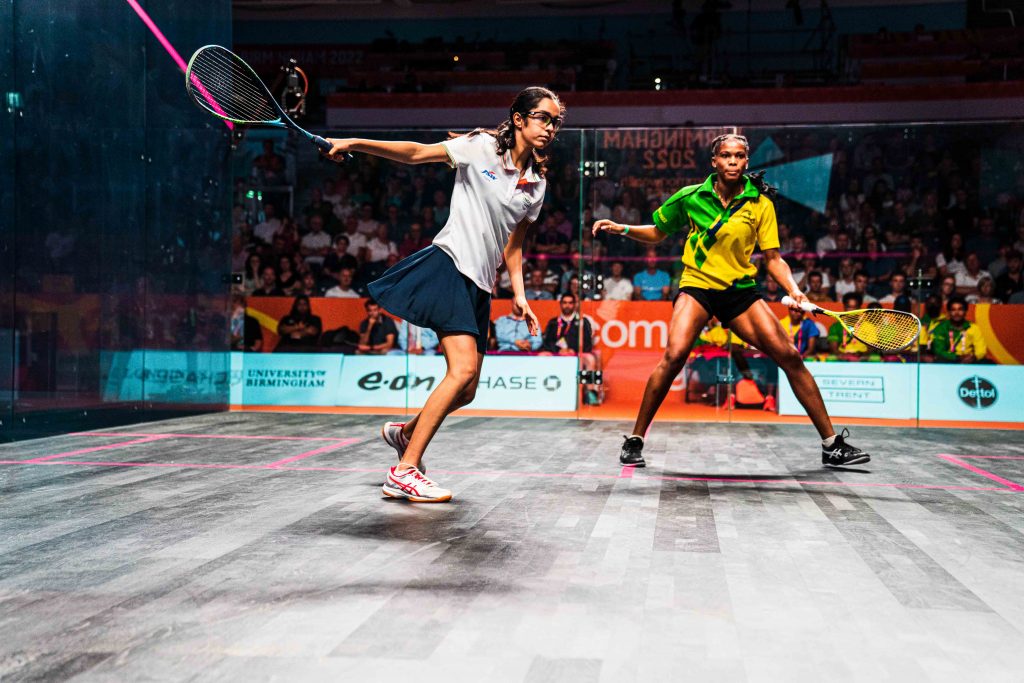 Day one of the Birmingham 2022 Commonwealth Games got off to a flying start across 28 matches on day one at the University of Birmingham Hockey and Squash Centre.

Ahead of most seeded players entering the draw tomorrow, much of the attention was on the outcome of Indian 14-year-old Anahat Singh’s clash with 21-year-old Jada Ross of Saint Vincent and the Grenadines.

After an inconsistent start to the first game, Singh showed exactly why she has stormed into the Commonwealth games at such a young age. Once the teenager found her rhythm in game one, she quickly began to dominate, with unerring accuracy and consistent lines leaving Ross with few scoring options as Singh took the opener 11-5.

Singh only grew in confidence after the first game and began pushing further up the court, with her deceptive power leaving Ross stranded as she took the second 11-2, before stunning the crowd with a brutal 11-0 in the third.

Singh will now play Welsh World No.19 and 5/8 seed Emily Whitlock in tomorrow’s second round.

“It’s really exciting because I’m getting to play a lot of senior players and it’s my first senior tournament. It’s really fun! My family are here with me now and cheering me on really loudly!” Singh said after the win.

“I didn’t really know what to expect, but now I know I can win and I’m doing really well. I got more confident as the games went on. I wasn’t really confident, but I had nothing to lose, so I wasn’t really nervous either!”

“A lot of people have said it’s good that we’re bringing in a youngster, but she’s here on merit. She is that good. I’m looking forward to seeing her go further from here.”

Earlier on the stunning show court, the day’s play got off to an exciting start as Botswana’s 17-year-old Leungo Katse overcame Ulema Chisenga of Zambia 3-0 (11-9, 11-4, 11-9) to set up a second round match with top seed and defending champion Joelle King of New Zealand.

Although Chisenga pushed Katse hard in each game, the 17-year-old was able to pull away after being level mid-game in all three games.

Speaking afterwards, Katse said: “The court is nice and the feeling is very good. It means a lot to be here representing Botswana, especially when you’re the first women to come in and play at the Commonwealth Games, it’s such an honour for me and my country.

“Mentally, win or lose I’m just going to have fun tomorrow against Joelle. She’s a professional player and I’m just 17. It would be a miracle to beat her, so I’m going big!”

Facing men’s top seed Paul Coll will be Niall Engerer, after the 29-year-old came through a Maltese derby with 18-year-old Kijan Sultana. Engerer, who coaches the Maltese national team, made a perfect start when he took the first game 11-7, before being pushed hard in a 15-13 win in the second by yesterday’s flagbearer.

Sultana continued to improve in the third game, which he took 11-9, before Engerer managed to eventually close out the match with a tight 12-10 in the fourth.

Afterwards, Engerer said: “It’s a bit frustrating, really [to have been drawn against a countryman in the first round]. He’s a player that’s really up and coming and I’m sure that he’ll have many more Commonwealth Games in him. It’s not nice playing your fellow countryman, but I’m just glad that we both had the opportunity here.

“I think [a bit of wisdom and experience] saw me through. I was worried about going to five, so just glad to get off in four and hopefully have something to give [New Zealand’s top seed] Paul Coll tomorrow!”

In the match of the day, Sri Lanka’s Shamil Wakeel fought back from two games down to beat Barbados’ Shawn Simpson.

The powerful and accurate Simpson had the upper hand in the match’s early exchanges, taking the first game 11-6 before edging the second 11-9.

Wakeel, though, dug deep. The Sri Lankan moved around the court well and began to find his length, taking the third game 11-6 and then levelling the match with a narrow 11-9 win.

With momentum and the crowd behind him, Wakeel came into the crucial fifth game flowing with confidence. The 23-year-old looked sharp as Simpson made multiple errors, with the Sri Lankan cantering to an 11-1 win to the cheers of the crowd to set up a second round clash with India’s 3/4 seed Saurav Ghosal.

Speaking after the match, Wakeel thanked his coach and the crowd for the support, adding: “I’m happy with my performance because I tested positive for Covid-19 a week ago and today was my first day back on court for 10 days. It was tough. He was winning 2-0 and I came back. I feel so much better now! The first few games I was not fit. I thought I was going to lose.

“I haven’t played a match on a glass court for five years. It’s so different to a plaster court. I couldn’t get used to the reflections and the crowd. It was a great experience, though, and I’m so excited to play Saurav tomorrow.”

While there were no English players involved, there was plenty of home interest in the first match of the evening session, with Scotland’s 9/16 seed Rory Stewart playing Kenyan University of Birmingham physics student Muqtadir Sadruddin Nimji.

World No.66 Stewart took the first game 11-7 but was pushed all the way in the second by the World No.496. The Kenyan forced Stewart into errors with impressive attacking play, but fell just short after Stewart – who drew applause from the crowd after telling referee Mike Collins that his initial game-winning shot was Nimji’s point – took the game 13-11 before the Scot wrapped up the win with an 11-4 win in the third.

“I kept telling myself ‘Im not nervous,’ but I guarantee I was. Its was really difficult and I’m glad to get through.

“There were a few shouts [for Nimji] but there are lots of Scots in the venue and thanks to them.”

Nimji said: “Rory was a great sportsman to not take a game winning point in the second set. I was very surprised with that. I know lots of people who would not have said anything.”

“I knew when I applied to the University of Birmingham that the Commonwealth Games would be held here. I missed out on the last Games by one position, which I was devastated about. I looked online to see where the next Games would be held, and it was at the same time I was applying to university.

“It was a great turnout; it was surprising to see so many people. It’s so cool for a first-round match. It was great to have all the support, from all the people at the University of Birmingham, and those at home in Kenya.”

Round two of squash at the Birmingham 2022 Commonwealth Games begins tomorrow at 12:00 (GMT+1).