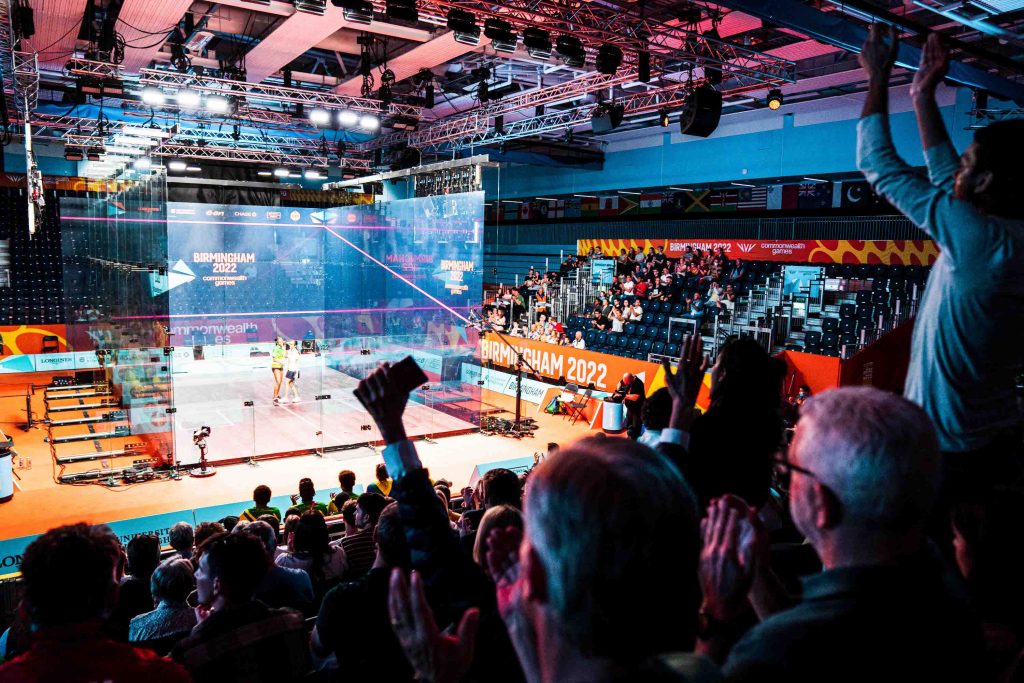 After yesterday’s thrilling opening round, the seeded players enter the fray today for round two of the Birmingham 2022 Commonwealth Games at the University of Birmingham Hockey and Squash Centre.

After receiving a bye in round one, women’s top seed Joelle King of New Zealand goes straight into the action. She plays in the day’s first match on the show court at 12:00 (GMT+1). King will be aiming to add to her impressive tally of six Commonwealth Games medals and is the defending women’s singles and doubles champion.

Men’s top seed and World No.2 Paul Coll, a beaten finalist in 2018, immediately follows King as he takes on Niall Engerer, who came through a tough Maltese derby yesterday.

For the home fans, there is plenty to look forward to after all the English players received a bye in round one. Six English players are involved today, including defending men’s champion James Willstrop, who is up against Gibraltar’s Christian Navas on the show court at 18:30.

The 38-year-old will be joined on the show court by compatriot and women’s No.2 seed Sarah-Jane Perry. Perry, a Birmingham native and runner up in 2018, plays Jade Pitcairn of the Cayman Islands at 19:15.

Five of Singh’s compatriots are involved today, including Indian men’s No.1 and 3/4 seed Saurav Ghosal. The 35-year-old plays Sri Lanka’s Shamil Wakeel – who put in one of the performances of the day yesterday to come from two games down to beat Jamaica’s Shawn Simpson – and will be hoping for redemption after a shock round two loss in 2018.

Ghosal’s tormentor in Gold Coast, Jamaica’s Christopher Binnie, who recovered from two games down to stun the Indian four years ago, is also involved again today. The 33-year-old, competing in his fifth Commonwealth Games, beat Ghana’s Evans Ayih yesterday and is playing Ramit Tandon for a place in the last 16.

Despite the considerable experience of the likes of Willstrop, Ghosal and Binnie, they are all trumped by that of Australia’s Rachael Grinham in the women’s draw. Grinham, 45, has competed at six Commonwealth Games across singles and doubles, including at squash’s Commonwealth Games debut in 1998.

Grinham, who has eight Commonwealth Games medals, plays 9/16 seed Donna Lobban in an all-Australian affair on the show court at 18:00. While the pair share a 5-5 head-to-head record, Lobban will take confidence from a run of three successive wins.

Viewers around the world can watch squash’s show court action at the 2022 Commonwealth Games live. Click here for a list of broadcasters by country.