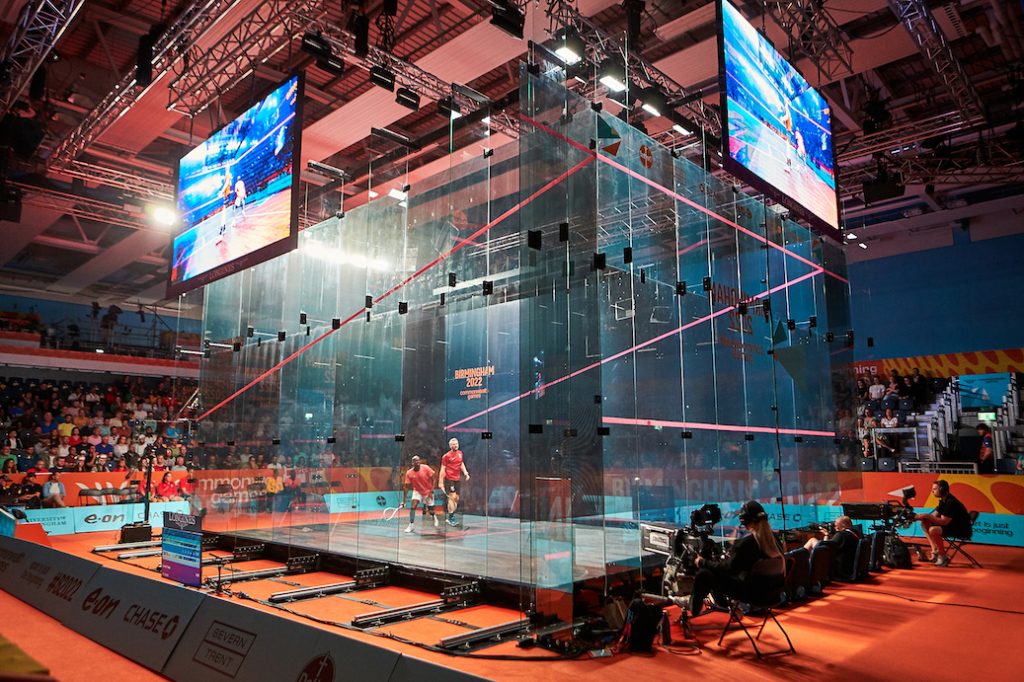 We’ve reached the last 16 stage of squash at the Birmingham 2022 Commonwealth Games at the University of Birmingham Hockey and Squash Centre in England.

Nine nations are represented across the men’s and women’s draws as the last 32 players standing bid for a place in tomorrow’s quarter-finals.

Play begins at 12:00 (GMT+1) on the show court with top seed and World No.5 Joelle King playing Scotland’s 9/16 seed Georgia Adderley. King, the defending singles champion, has never played the World No.62 before, but will no doubt take confidence from her crushing performance yesterday as she beat Botswana’s Leungo Katse 3-0 in 15 minutes.

Men’s top seed Paul Coll immediately follows, with the World No.2 – a beaten finalist in 2018 – going up against Emyr Evans of Wales in a first meeting. Evans is one of just four unseeded players left in the competition after the 25-year-old impressed in a 3-1 win over 9/16 seed Mohammad Syafiq Kamal yesterday.

All six players for hosts England are involved today after every member of the team recorded straight-game victories yesterday.

5/8 seed and defending Commonwealth Games champion James Willstrop faces unseeded Pakistani Nasir Iqbal on the show court at 14:15 in the last match of the afternoon session, while women’s No.2 seed and 2018 runner up Sarah-Jane Perry, a Birmingham native, takes on Malaysian 9/16 seed Chan Yiwen at 19:30 on the show court.

Welsh No.2 seed Joel Makin, who studied at the University of Birmingham, is involved in a British battle as he takes on Alan Clyne of Scotland. The two have met five times in their careers, including in a 99-minute epic in the quarter-finals of the 2018 Commonwealth Games, in which Makin clinched the fifth game 12-10 after going 2-1 down.

Makin’s compatriot, 5/8 seed Emily Whitlock, has also clashed with her opponent, Australia’s 9/16 seed Donna Lobban, five times before. Whitlock holds a 3-2 advantage in the head-to-head record, though Lobban won their most recent encounter 3-2 after fighting back from 2-0 down.

Elsewhere, India’s 3/4 seed Joshna Chinappa will be taking to the show court at 13:30 to play unseeded Kiwi Kaitlyn Watts, while her compatriot and men’s 3/4 seed Saurav Ghosal will play Canada’s 9/16 seed David Baillargeon on court two at 18:00.

After England, Malaysia have the most players remaining, with Eain Yow Ng, Ivan Yuen, Aifa Azman, Rachel Arnold and Chan Yiwen all involved.

Today also sees the plate tournament, played between players knocked out earlier in the tournament, get underway. All of the plate match action will be played on courts one, three and four.

Viewers around the world can watch squash’s show court action at the 2022 Commonwealth Games live. Click here for a list of broadcasters by country.