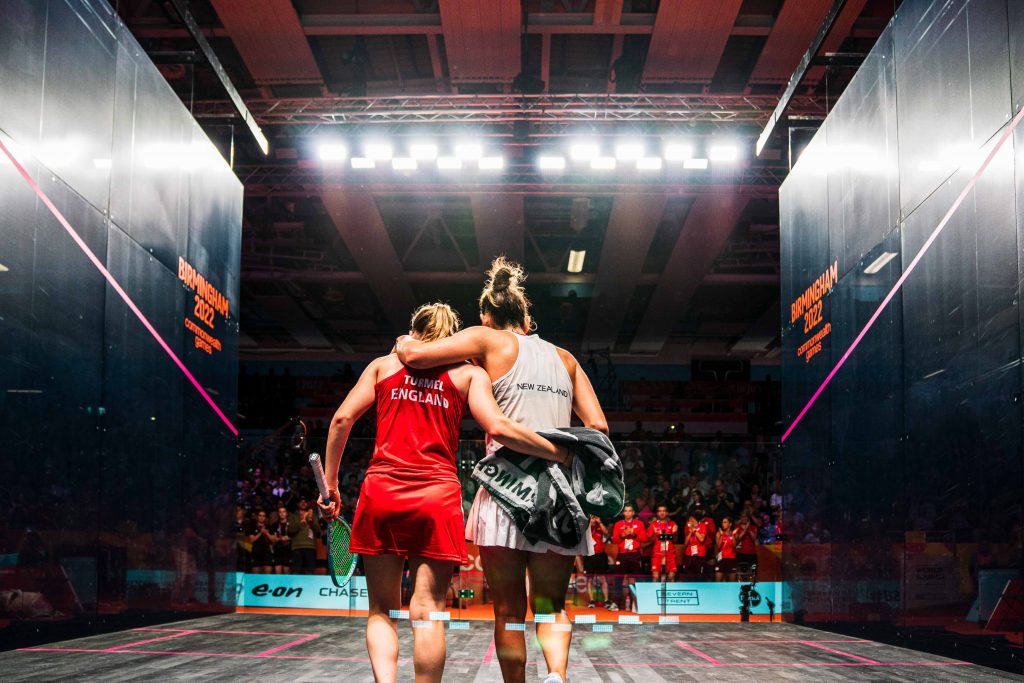 After a day of epic performances, featuring comebacks, upsets and history being made, the Commonwealth Games semi-finalists have been confirmed.

Play began with one of the most entertaining matches of the tournament so far, as defending champion and top seed Joelle King was put through the ringer by English 5/8 seed Lucy Turmel as the Kiwi edged a nail-biting 85-minute encounter 3-1.

Despite her inexperience and a 4-0 losing record against King, it was the 22-year-old Turmel who looked the more confident player in the opening game. While King played too many loose shots, Turmel was tenacious, and the Englishwoman took a surprise first game lead with an 11-9 win.

King looked like she’d found an instant response as she went 10-2 up in the second, only to be shocked by an extraordinary burst from Turmel, who saved every game ball. What followed was a nail-biting contest, with both players having further game balls, before King finally ended things when she converted her 11th game ball to take the epic 29-minute second game 18-16.

In a stop-start third game, King was able to get her nose in front with a tight 11-9 win and then looked well set to take the match when she had two match balls at 10-8.

Once again, Turmel battled doggedly and was able to save both match balls and force yet another tie break, before King finally made the decisive breakthrough to take the match with a 14-12 win.

Afterwards, King said: “Lucy played an unbelievable match today, all credit has to go to her. She came here on a big occasion, came from upstairs [traditional] court and gave everything. I was thinking it was going to be a long walk back to camp if I lose and just had to find a way to win and I’m happy to be in the semis.”

King’s opponent tomorrow will be 5/8 seed Hollie Naughton, after the 27-year-old upset India’s 3/4 seed Joshna Chinappa to become the first ever Canadian woman to reach the Commonwealth Games semi-finals.

Naughton, who was born in Barnsley, was roared on by the crowd as she took a fast-paced opening game, fighting back from 6-2 down to win 11-9.

The Canadian seemed to draw confidence from this as Chinappa wilted. From 6-5 up in game two, Naughton then accelerated away and took a commanding 2-0 lead with an 11-5 win.

The decisive final game was a much more even affair, with neither player able to pull clear. Chinappa had opportunities to find a foothold in the match with game balls at 10-9, 11-10, 12-11, and 13-12, but was frustrated each time by Naughton, who finally put the match to bed to make history with a 15-13 win.

Afterwards, Naughton said: “It’s unbelievable, a dream come true really. I knew I had to keep the nerves at bay. Playing in front of an atmosphere like this is something you don’t do too often! Thanks everyone for coming out.”

In the men’s draw, defending singles champion James Willstrop rolled back the years to overcome Scotland’s Rory Stewart in a thrilling contest and set up a British battle in the semi-finals against Wales’ No.2 seed Joel Makin.

Having watched World No.65 Stewart send teammate Patrick Rooney out yesterday, Willstrop was composed as he took the first game 11-5.

At 7-3 down in the fifth game, Willstrop looked in trouble. The 38-year-old, however, then found another level, with the former World No.1 finding space behind the Scot to reach his fourth successive Commonwealth Games semi-final with an 11-8 victory.

After the match, Willstrop paid tribute to Turmel, saying her performance against King had inspired him to dig in for the victory.

Willstrop will be joined in the semi-finals by two of his compatriots, albeit in the women’s draw, after No.2 seed Sarah-Jane Perry recorded a 12th successive victory over Welsh 5/8 seed Emily Whitlock and 3/4 seed Georgina Kennedy brutally dispatched Malaysia’s 9/16 Rachel Arnold.

Kennedy’s 3-0 victory was the quickest match of the day by some margin. In fact, so short was it that it could have been five times alongside the King-Turmel clash with Kennedy, who smothered the Malaysian with relentless harrying, needing just 17 minutes to reach the semi-final in her first Commonwealth Games.

Even Kennedy herself seemed somewhat surprised by the quality of her performance, with the 26-year-old saying afterwards: “I don’t know what came over me. I’ve been training a couple of years for this event and that’s the best squash I’ve played this season. All day I’ve had a lot of energy and it all came together.

The other home player involved, Adrian Waller, lost out 3-0 to New Zealand’s top seed Paul Coll, with Coll speeding away after a tight 12-10 win in the first game.

Elsewhere, India’s 3/4 seed Saurav Ghosal beat Scottish 5/8 seed Greg Lobban 3-1 in a match defined by rapid rallies, while Joel Makin ended the day’s play with a 3-1 win over Malaysian 5/8 seed Eain Yow Ng in a match interrupted for 15 minutes by an injury to the Malaysian’s eye.

Yesterday also saw the plate event, played between players knocked out earlier in the tournament, reach the semi-final stage. Click here for the plate results.

The semi-finals of squash at the Birmingham 2022 Commonwealth Games begin tomorrow (02/08) at 16:00 (GMT+1). Click here for a list of broadcasters by country.