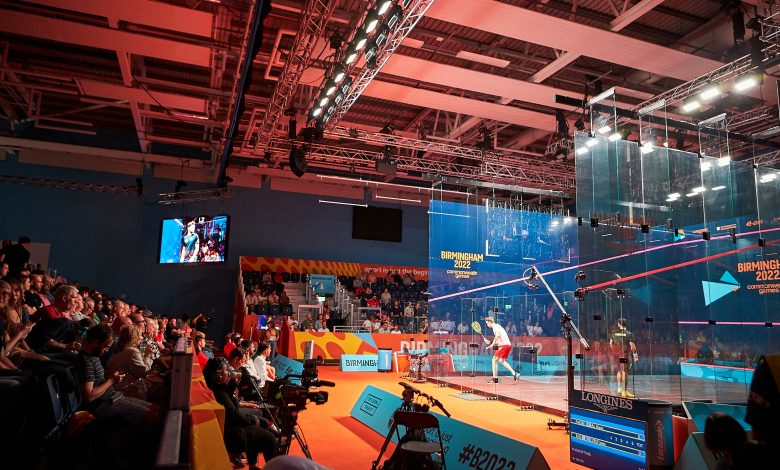 We’re into the business end of the Birmingham 2022 Commonwealth Games as the last eight players in each draw compete for a spot in the semi-finals at the University of Birmingham Hockey and Squash Centre in England.

All eight matches will take place on the stunning show court from 12:00 (GMT+1), where a crowd of 1,750 will cheer on players from seven nations across the men’s and women’s draws. Viewers around the world can watch the action live, with BBCiPlayer streaming 11:55-15:00 and 17:55-21:00 for home fans. Click here for a list of broadcasters by country.

There’s home interest from the start as England’s 22-year-old 5/8 seed Lucy Turmel, appearing at her first Commonwealth Games, goes up against defending champion and top seed Joelle King of New Zealand in the day’s opening match.

The 33-year-old enjoys a healthy 4-0 head-to-head advantage over Turmel, with their last match a 3-0 win in 70 minutes for King at the British Open four months ago.

The day’s second match is another New Zealand v England clash, with King’s compatriot and fellow top seed Paul Coll playing England’s 5/8 seed Adrian Waller. Nicknamed ‘Superman’ for his incredible athletic ability, World No.2 Coll enjoys a brutal 7-0 head-to-head record against Waller and will be hoping to extend that run as he targets an improvement on his 2018 silver medal.

The man who beat Coll in the Gold Coast 2018 final, England’s James Willstrop, is also in action today. The 38-year-old 5/8 seed, appearing at his fifth Commonwealth Games, will be looking to score some revenge for England in his first meeting with Scotland’s 9/16 seed Rory Stewart, who dumped Willstrop’s teammate and 3/4 seed Patrick Rooney out yesterday in the comeback and shock of the tournament.

The other two English players on court today are No.2 seed and 2018 runner up Sarah-Jane Perry, who will be hoping to extend an 11-match winning run against Wales’ 5/8 seed Emily Whitlock, and 3/4 seed Georgina Kennedy, who faces Malaysia’s 9/16 seed Rachel Arnold. Kennedy has enjoyed a breakout year on the professional circuit, with the 25-year-old climbing a whopping 162 places in the space of one year.

Both Whitlock and Arnold have compatriots involved today in the men’s side of the draw, with Welsh No.2 seed Joel Makin going up against Malaysian 5/8 seed Eain Yow Ng, against whom he has a 3-0 record.

Today also sees the plate tournament, played between players knocked out earlier in the tournament, resume. All of the plate match action will take place on court four.